On May 15th 2012, ADay.org asked people around the world to pick up their camera and photograph daily life. Over 100,000 photos from 165 countries were submitted.  On 8th October, the 2nd stage of the project began when forty-five of the best photographs were shown around the world in the largest photography exhibition ever staged – reaching an estimated worldwide audience of 46 million over a period of 48 hours. The massive operation was executed by the Posterscope network and involved 284 digital networks, 73 media partners and over 85,000 screens across all the major continents.  This global synchronised exhibition kicked off on the farthest easterly screen in Sydney, Australia and traveled across the world until it reached the most westerly screen in the USA.

Sony Mobile is deploying a nationwide NFC-enabled OOH campaign in shopping malls and on roadside, as part of the launch marketing activity for the Sony Xperia T phone. Consumers are able to download a specially-mixed music track from music producer Benga from the sites via their smartphone.  The campaign was planned and booked by Posterscope and PHD with JCDecaux.  The mall sites also feature directional sound speakers which give a personal preview of the Benga track to the individual in front of the advertising site.

Kit Kat’s  ‘We Will Find You’ promotion involves six chocolate bars fitted with a GPS tracker which when activated alerts a team who will track down the winner and hand over a £10,000 prize. OOH supports the activity, 3,000 6 sheets have been fitted with NFC and QR Touchpoints that allow users to interact with the promotion, get live updates showing how many bars still remain and link to a secondary competition via Facebook. Posterscope, working in conjunction with Mindshare, JWT and Pragmatica delivered this campaign with JCDecaux, Clear Channel and Primesight. 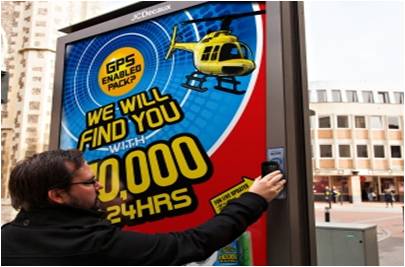 To promote the launch of their new reality TV show, Hotel GB, Channel 4 wanted to give the public a literal view behind the scenes of the running of the celebrity hotel. Installing peep hole screens at 4 sites across London, allowed viewers to peer through a hotel keyhole and see the celebrities perform comical skits on a digital screen.  Each site was fully branded with a hotel door, a welcome mat and hotel wallpaper to give the impression of actually stepping into the hotel. The campaign was planned and created by OMD and Posterscope.

The McCain’s OOH campaign, planned and bought by PHD and Posterscope,  involves strategically targeted sites that link the creative message with the environment as well as a number of special build interactive bus shelters and 6 sheets.  The JCDecaux bus shelter, which says ‘Hi Five, if you’re having chips tonight,’ dispense coupons with cheers and whoops after users high five a giant hand whilst the 6 sheets read ‘Hop, Skip and Jump if you’re having chips tonight’ with a hopscotch chalked up on the pavement below. 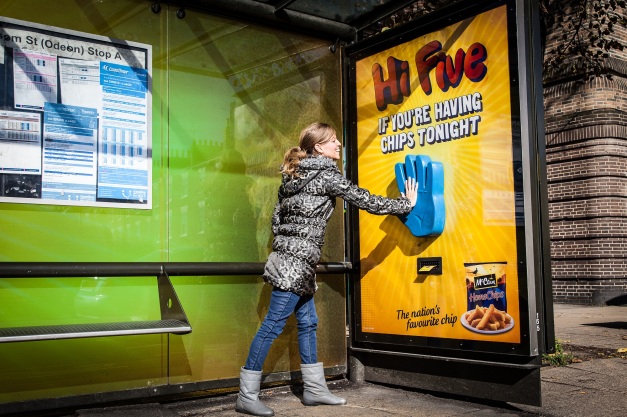 Spiders on the roof

Seattle-based artist and science illustrator, Marlin Peterson, was commissioned to paint a mural in his city. Rather than a standard wall mural, he chose a roof of a building right underneath the Seattle Space Needle where, using an optical illusion technique called trompe d’oeil, he painted two giant daddy long-legs. The monstrous bugs look as if they’re taking over the building when viewed from above, and the Space Needle makes a great location for viewing Peterson’s terrifying mural. 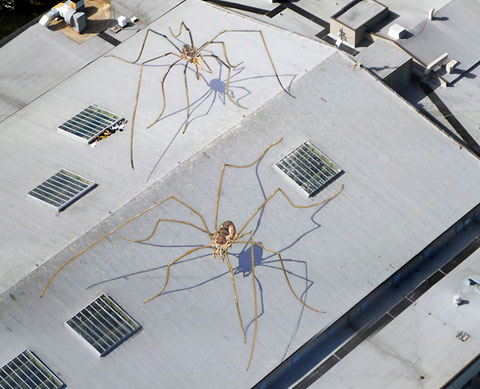 Intel used augmented reality face-tracking technology on 12 wrapped bus shelters to promote their new Ultrabook.  Passersby were invited to stand in front of a screen and choose from Medieval, Western and Kung-Fu themes by donning a virtual hat.  They could then take and upload a picture to the Intel Facebook campaign and enter a prize draw via a QR code. The campaign was planned and created by Posterscope, OMD, JCDecaux innovate and Total Immersion.

To encourage everyone to walk more and drive less, the China Environmental Protection Foundation created ‘Green’ pedestrian crossings using canvasses and ink pads. Giant white canvasses with a bare tree were placed across 132 crosswalks in 15 cities, and as pedestrian crossed, their shoe soles, imprinted with a small amount of green paint, left behind a trail of leaf-like footprints. Almost 4m people passed through the installations, and the final posters were eventually hung in several urban locations.

Interact with a billboard to reveal a face

Studio Moross created an interactive billboard in collaboration with Red Bull to promote Jessie Ware’s new album ‘Devotion’. Fans were invited to fill in dots on the billboard while listening to the music, ultimately revealing an image of the singer’s face.